Scottish Widows reports 2014 – the UK nation and savings. What are our attitudes towards saving and how do we do it? - Evolution Financial Planning

Scottish Widows reports 2014 – the UK nation and savings. What are our attitudes towards saving and how do we do it? 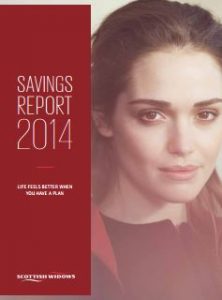 Scottish Widows research proffers that human beings are focused on the immediate, by our nature, wanting satisfaction and fulfilment right now, having little interest in putting them off. In the world of finance, that means we want to see the guaranteed benefits of our money right now, instead of wondering about our future which is intangible and delayed even if we know that it means our lives in the future will be secure.

As a nation, how do we plan for the long term future of our finances?

This is the question that the report is looking to answer. We do know that we must save for the future, but so many people ignore it or put it off. Their report is based on an online survey of 5000 plus adults in the United Kingdom and was conducted in March 2014 by an independent research agency, YouGov. It asks about the attitudes to saving and how people can manage their money better.

Caroline Rookes, CEO of MoneyAdviceService says, “This report suggests that many people instinctively understand the need to cut back when the going gets tough. That’s good news. It’s not quite such a positive finding that while people refuse to countenance reducing their phone or mobile usage, they find it comparatively easy to cut back on protecting their assets and their families against an unwelcome turn of events.”

19% of people in the UK have no savings at all. It doesn’t sound like a big number until you put it into number of people, so that’s around 16 million, one third of the adult population! The majority of these are between the ages of 35-49 years, which are the majority of people with dependent children and mortgages.

Yet a massive 55% think that individuals should take more responsibility for saving more.

What people forget is that there are a few future costs that they will have to deal with for which no one is currently saving for such as retirement and assistance for their children’s futures.

The problem which is noted in the report is that many people are still not sure what long term means and how much we need to save to cover emergencies, holidays and our retirement. Everyone wants to retire early, but they still want to spend money now rather than thinking about putting it away for the future.