Women and pensions. An insight in to how women view pensions and what their attitudes are towards pension providers, a report from Scottish Widows. - Evolution Financial Planning

Women and pensions. An insight in to how women view pensions and what their attitudes are towards pension providers, a report from Scottish Widows. 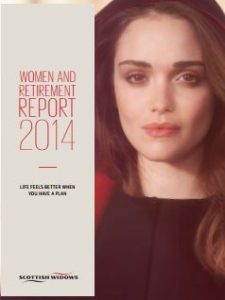 How do women in the United Kingdom save for the future and plan for retirement? How do they approach financial planning?

To answer these questions, Scottish Widows prepare an annual report, of which their previous reports are available from their website.  Their report is based on an online survey of 5000 plus adults in the United Kingdom and was conducted in March 2014 by an independent research agency, YouGov.

This report takes an in-depth look at women’s attitudes to saving and planning for their futures and highlights areas that women must tackle in order to make themselves financially secure.

The good news for women and their pensions is that:

Today, Scottish Widows research shows that half the female population is now saving enough for a decent retirement, a number that has increased by 10% in the last year alone.

Also women are showing that they are committed to saving and are becoming more educated about pensions and savings.

The bad news is that:

The barriers are still up against women and savings. The increase in the threshold for automatic enrolment into pension schemes, have left 1.5 million out of the benefits of signing up to a pension scheme. 1 million of those left out are women because of part time hours and low pay, which women are still in the majority for both.

Low pay is key to the figures in the report, which shows that women are saving around 40% LESS than men, which is more than 2013. This gender gap in pay has actually widened over the last year for the first time in five years!

A few other key areas in the report:

So, women as a whole need help with understanding their pension and learning what they need to do to make sure that their pension is totally adequate for their needs when they retire. It is a must nowadays to have a personal or work pension as the state pension is nowhere near adequate to retire on and this is something that all women and men need to be made aware of and given help to put a scheme in place that will go towards a comfortable retirement.